HARMONI has a dedicated tool for performing quantitative simulations of HARMONI observations. The HARMONI simulation pipeline was developed at Oxford (Zieleniewski et al. 2015b), and used to develop several key science cases, as part of the design and development of the HARMONI integral field spectrograph. The tool has since been enhanced and entirely re-written by M. Pereira-Santaella.

The goal is to be able to simulate the performance of the instrument folding in detailed parameters including the ELT AO performance, atmospheric effects and realistic detector statistics. This webpage will be regularly updated as the simulator pipeline evolves and improves.

The pipeline is written in Python3. It should run on any OS as long as the relevant Python libraries are installed (see below). We have tested it on Mac OSX and Linux (Ubuntu 18.04). It is possible to run on Windows, but we have done little testing.

The required Python modules are:

Make sure the modules can be found by your Python implementation. E.g. in a Python environment try:
>>> import numpy
>>> import scipy
>>> import astropy
>>> import photutils
>>> import matplotlib
There should be no errors!

The pipeline takes an input FITS file datacube containing spatial and spectral information about the astrophysical source of interest. The format should be an (x, y, λ) datacube with each pixel containing the value of flux per sq. arcsec (e.g. erg/s/cm^2/μm/arcsec^2 or MJy/sr). The FITS datacube needs to have the following headers:

All other headers will be ignored by the pipeline so extra information can be added.

A simple input data cube generation interface (CUBEGEN) has been created to help with this stage. It has been developed by Simon Zieleniewski based on work by Nicholas Zieleniewski and Sarah Kendrew.

The source code can be found HERE.

CUBEGEN allows the user to generate input data cubes for a range of template spectra, as well as user-uploaded files, for both point sources or extended objects (Sersic profiles). The code is still in *beta* stage but has undergone moderate testing.

The simulation pipeline allows for various observing parameters. These are listed in order as follows:

HSIM3 adopts a "follow-the-photons" philosophy, with the sky, telescope, instrument and detector effects applied in order.

The AO PSF is generated for each wavelength of the cube from a WFE map, which is itself generated from the Power Spectral Density (PSD) of the AO system. Subsequently, the residual tip-tilt jitter is added as a Gaussian with the user-defined σ. It is recommended that the input cube has 1, 2, 3 or 3 mas sampling, for the four HARMONI spaxel scales.

If the input spectral resolution (denoted by the SPECRES header) is finer than the chosen output, the cube is convolved with the corresponding Gaussian line spread function to yield an output at the instrument's resolution. It is recommended to provide an input cube with a factor of 2 better spectral resolution (and Nyquist or better sampling) than the R of the chosen grating.

The effect of atmospheric differential refraction is then added to the datacube, along the longest spatial axis and relative to the central wavelength channel. The ADR model is developed from Kendrew et al. (2008). 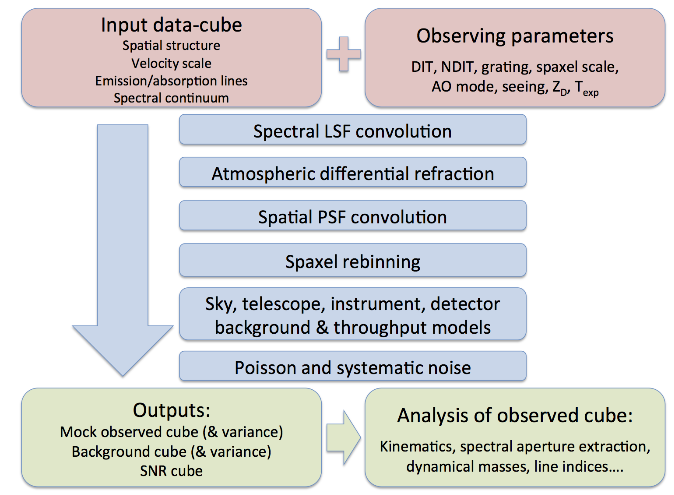 The outputs have the basename of the the input cube, with the following suffixes:

There are several other outputs, details of which may be found in the manual. The output "observed" cubes represent the result of a perfect data reduction process and are ready to be analysed.

We point out here several useful tips that have emerged from our extensive development process. 1. QFitsView is a great tool for visualising 3D datacubes: Download Here 2. Datacubes can get very large very quickly and fill up the memory even on large computers. HSIM does let the user choose the number of parallel processes (on multi-core machines) and reducing this number allows larger cubes to be processed, albeit at the cost of increased simulation time. The input datacube can be tailored to suit the required needs. For example if one is only interested in the spatial information of an object (e.g. around an emission line) then the cube can be kept very small in the spectral dimension. 3. The flux density units for input datacubes require the usual flux (erg/s/cm^2/AA) to be divided by the spaxel scale in arcsec. This then gives e.g. erg/s/cm^2/AA/arcsec^2.

The source code for HSIM3 is available in github, with the exception of some large files needed for generating the PSF and the detector systematics. These files should be installed in the sim_data/PSF directory.